Wash the snake gourd, remove the inside and cut into 2 inch pieces. Marinate the mince with a teaspoon of chilly powder, tumeric powder, a little salt and some chopped coriander leaves. In a pan heat the oil and fry the chopped onions till golden brown. Add the ginger garlic paste and sauté for some time. Add the chilly powder, coriander powder, spice powder, green chilies, coconut and salt and fry for a few minutes .Add the tomato puree and fry till the oil separates from the masala. Now add 2 cups of water and bring to boil. Meanwhile stuff the snake gourd rings with the marinated mince. Pack each ring tightly so that the mince does not fall out. Slowly drop the stuffed snake gourd pieces into the boiling curry and cook on low heat till the gravy is sufficiently thick and the mince is cooked. Garnish with chopped coriander leaves. Serve hot with coconut rice or plain rice.

A COLLECTION OF SIMPLE ANGLO-INDIAN RECIPES – By Bridget White 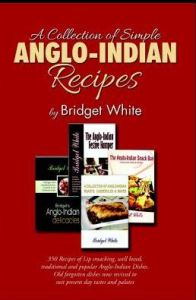 The huge selection of Recipes featured in this Cookery book will surely take one on a sentimental and nostalgic journey down  memory lane of old forgotten Anglo-Indian Delicacies. All the old dishes cooked during the time of the British Raj have now been revived to suit present day tastes and aplates. This Cookery Book would also serve as a ‘Ready Reckoner’ and a useful guide for teaming up dishes for everyday Anglo-Indian   Meals as well as for festive and special occasions.

Add that special ‘Anglo’ touch to your meal by baking a simple and tasty Shepherd’s Pie, a Pot Luck Casserole, a Pork Mince Pie or any of those old ‘one dish meals’  that your grandma baked in your childhood. Choose your favourite baked dish recipe from A COLLECTION OF ANGLO-INDIAN ROASTS, CASSEROLES AND BAKES. The very names of the recipes will make you drool. Round  it off with a creamy Caramel Custard, Bread Pudding, Strawberry Flummery, Apple Grunt or any other lip-smacking Anglo-Indian Dessert or Sweet from the vast selection that has been featured.

Host a Party and serve your guests old Anglo-Indian Short Eats and Nibbles from THE ANGLO-INDIAN SNACK BOX, that were the rage at ‘Parties, Soirees and Elegant Evening Gatherings’ in the olden days –  all innovated and made famous by the Mog Cooks of yore in the Tea Gardens in the Hills. Snack on Liver on Toast Squares, Scotch Eggs and Deviled Eggs, Cheese Straws, Mince Curry Puffs, Coconut Puffs, Mince Panthras, Fish Fingers, Fritters and a whole lot more,

What’s your favourite childhood Christmas memory?  Do you associate Christmas with the smells, sounds and sights of the season?  This Cookery Book aims at just that. The separate section on THE ANGLO-INDIAN FESTIVE HAMPER features recipes of all the old Anglo-Indian Christmas favourites such as the Traditional Christmas Cakes, Plum Cakes, Mince Pies, Fruit Cakes, Kalkals, Rose Cookies, Coconut Sweets, the Christmas Pudding, Bole Cake, Semolina Cake, Dodol, Beveca, Marzipan Sweets, Peanut Fudge, Cashew nut Fudge, , etc, etc. It will awaken long forgotten magical memories of   childhood – Of  the smell of the decorated Pine Christmas Tree in the sitting room, the enticing aroma of Christmas Cakes being baked, the Kalkals and Rose Cookies being fried and the aroma of the other Christmas Goodies being prepared in the kitchen by Mama and Nana – Memories of the whole family sitting round the dining table on “Kalkal Making Day” rolling the kalkals on the back of a fork or fighting to lick the left over cake batter in the mixing bowl come flooding back.  Recreate the Christmas of your childhood with these recipes of all the old Christmas Treats. Then to round off the festive spread, you could make your own home-made Grape and Ginger Wine.

The recipes in this book are simple and easy to follow and only easily available ingredients have been suggested. The easy-to-follow directions for preparing these old, popular, sumptuous dishes make cooking simple, enjoyable and problem-free. The pungency of the dishes can be adjusted according to individual taste by reducing or increasing the amount of chillie powder, spices or pepper powder suggested in each recipe.

All the recipes in this Book are for 6 generous servings. If cooking for a smaller or larger number, the quantities should be adjusted accordingly.

The word “Everlasting” means ‘something, that once created, endures through time and never ceases to exist’. Anglo-Indian Cuisine is “EVERLASTING” and will endure forever and ever. 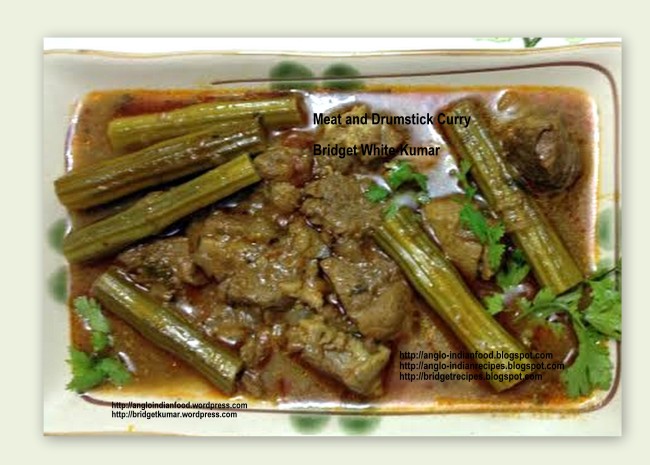 Scrape the drumsticks and then cut them into 2 inch pieces. Wash and soak in a little water. Boil the meat with sufficient water and a little salt till tender. Heat oil in a pan and add the onions and fry till golden brown. Mix in the ginger garlic paste and fry for a few minutes. Add the tomatoes, chillie powder, salt, coriander powder, cumin powder and coconut paste / milk and sauté for a few minutes. Now add the drumsticks and boiled meat and mix well. Add the left over meat stock / soup or 1 cup of water and cook on low heat till the drumsticks are cooked, taking care not to overcook the drumsticks. Serve as a main curry with rice.

Bridget White-Kumar is a Cookery Book Author and Food Consultant. She has authored 7 Recipe books on Anglo-Indian Cuisine. Her area of expertise is in Colonial Anglo-Indian Food and she has gone through a lot of effort in reviving the old forgotten dishes of the Colonial British Raj Era.
Her 7 Recipe books are a means of preserving for posterity, the very authentic tastes and flavours of Colonial India, besides recording for future generations, the unique heritage of the pioneers of Anglo-Indian Cuisine.
Bridget is also an Independent Freelance Consultant on Food Related matters. She has assisted many Restaurants, Hotels and Clubs in Bangalore and elsewhere with her knowledge of Colonial Anglo-Indian Food besides helping them to revamp and reinvent their Continental Menus by introducing new dishes which are a combination of both Continental and Anglo-Indian. Many of them are now following the Recipes and guidance given by her and the dishes are enjoyed both by Indian and Foreign Guests.

Bridget also conducts Cooking Demonstrations and Workshops at various places such as Clubs, Restaurants, Women’s Groups, Corporate Offices, etc. She is always ready to share and talk about Recipes and Food.

She can be contacted by email bridgetkumar@yahoo.com

1. ANGLO-INDIAN CUISINE – A LEGACY OF FLAVOURS FROM THE PAST is a comprehensive and unique collection of easy- to- follow Recipes of popular and well loved Anglo-Indian dishes. The repertoire is rich and vast, ranging from the outright European Cutlets, Croquettes, pasties, roasts, etc, to mouth watering Curries, Side dishes, Spicy Fries, Foogaths, Biryani and Palaus, Pickles, Chutneys etc, picking up plenty of hybrids along the way. The very names of old time favorite dishes such as Yellow Coconut Rice and Mince Ball (Kofta) Curry, Pepper water, Mulligatawny Soup, Grandma’s Country Captain Chicken, Railway Mutton Curry, Dak Bungalow Curry, Crumb Chops, Ding Ding, Stews, Duck Buffat, Almorth, etc, which were so popular during the Raj Era are sure to bring back nostalgic and happy memories. These popular Anglo-Indian dishes will take you on an exotic nostalgic journey to Culinary Paradise.
It is a practical and easy guide to delectable cooking. The book with its clear step-by-step instructions, describes the preparation of a variety of Anglo-Indian Dishes. The easy-to-follow directions make cooking simple and problem- free.
Price per book : India : Rs175.00, Australia: A$15.00, UAE: Rs 350.00, Canada C$15.00, UK: GBP 8.00, USA: $15.00

3. VEGETARIAN DELICACIES is a collection of simple and easy recipes of delectable Vegetarian Dishes. The repertoire is rich and vast, ranging from simple Soups and Salads, to mouth watering Curries, Stir fries, Rice dishes, Casseroles and Baked Dishes and popular Accompaniments. The easy-to-follow directions, using easily available ingredients, make cooking these dishes simple, enjoyable and problem-free. The book also highlights the goodness of each vegetable and their nutritive and curative properties in preventing and curing many health disorders.
Price per book : India : Rs150.00, Australia: A$15.00, UAE: Rs 350.00, Canada C$15.00, UK: GBP 8.00, USA: $15.00

4. SIMPLE EGG DELICACIES is a collection of simple and easy recipes of delectable Egg Dishes for Breakfast, Lunch and Dinner and for all other times as well. The repertoire ranges from simple Breakfast Egg Dishes and Egg Salads, to mouth watering Curries, Tea Time treats, Sandwiches, Casseroles and Baked Dishes. The recipes are extremely easy to follow and only easily available ingredients have been suggested. – A real treat for ‘Eggetarians’.
Price per book: India : Rs130.00, Australia: A$10.00, UAE: Rs 300.00, Canada C$10.00, UK: GBP 6.00, USA: $10.00
For Copies contact : bidkumar@gmail.com
1. Bridget Kumar (Bangalore) +919845571254 / 00918025504137

ALL CONTENTS ON THIS BLOG IS THE SOLE COPY RIGHT OF BRIDGET WHITE-KUMAR. PLEASE NOTE: NO ARTICLES, PHOTOGRAPHS, INFORMATION OR PART THERE OF, of this SITE / PUBLICATION may be reproduced, stored in or introduced into a retrieval system or transmitted in any form, or by any means, electrical, mechanical, photocopying, recording or otherwise WITHOUT THE PRIOR PERMISSION OF THE OWNER OF THIS BLOG. AS ANY INFRINGEMENT WILL AMOUNT TO PLAGARISM.